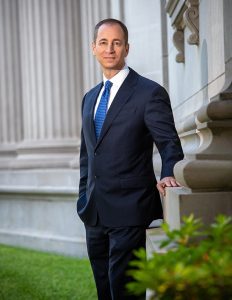 Grant M. Scheiner is a Houston criminal defense lawyer and Managing Attorney of Scheiner Law Group, P.C. He has practiced law in Texas since 1992. Mr. Scheiner opened a private firm in 1995. He has extensive trial experience and has represented people and businesses in a wide variety of legal matters in state and federal courts. Mr. Scheiner is Board Certified in Criminal Law by the Texas Board of Legal Specialization. He is a frequent author and lecturer on a wide variety of criminal law and trial topics.

Mr. Scheiner is President of the Texas Criminal Defense Lawyers Association. He is also a Fellow of the Texas Bar Foundation (a charitable organization of the top one-third of 1% of Texas lawyers) and serves on the Board of the Texas Board of Legal Specialization. Mr. Scheiner is a Life Member of the National Association of Criminal Defense Lawyers, a Fellow of the College of the State Bar of Texas, and a Former Chair of the Computer & Technology Section of the State Bar of Texas. He is a leader in the fields of criminal defense, federal defense, sex crimes defense, and DWI defense.

In every year from 2006 until the present, H-Texas Magazine has named Mr. Scheiner one of Houston’s “Top Lawyers.” In every year from 2009 until the present, Texas Super Lawyers (Thomson Reuters publication) has named Mr. Scheiner a “Texas Super Lawyer” in various categories including Criminal Law, Driving While Intoxicated (DWI) and Federal White Collar Defense. He is currently listed as one of the “Top 100 Trial Lawyers (South Region)” in the State of Texas by the National Trial Lawyers Association, 2007 – present. Additionally, U.S. News & World Report (Woodard/White d/b/a “Best Lawyers”) lists Scheiner Law Group, P.C. as one of the Top DUI/DWI law firms (“Tier I – Houston Metro”) in Texas.

Mr. Scheiner is a “Ranch Club” member and graduate of the nationally renowned Trial Lawyers College in Dubois, Wyoming. 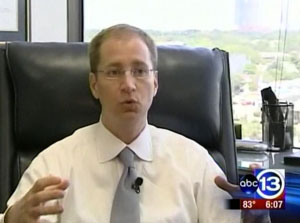 Mr. Scheiner is a co-author of the book, Defending DUI Vehicular Homicide Cases, 2012 ed., published by West, a Thomson Reuters business. He is a frequent author, lecturer and legal course director on topics ranging from criminal defense, cross-examination, sex crimes defense, Driving While Intoxicated, and the effective use of technology in the courtroom. Mr. Scheiner has also lectured the Houston Psychiatric Society on the Texas Insanity Defense. He serves on the annual faculty of the Texas Criminal Trial College in Huntsville.

Mr. Scheiner has studied police procedure and is a certified practitioner and instructor of Standardized Field Sobriety Testing, by the National Highway and Traffic Safety Administration and the International Association of Chiefs of Police. He is one of a handful of attorneys in the United States to have completed an American Chemical Society-approved course in “gas chromatography”, which is the science behind blood testing of alcohol and other substances. Mr. Scheiner has also completed an intensive Spanish language “immersion” program at the internationally acclaimed Academia Hispano Americana in San Miguel de Allende, Mexico.

Mr. Scheiner received his juris doctorate from the University of Houston Law Center in 1992. As a law student, he was active in trial and appellate advocacy. He earned first-place honors in Law Center mock trial, moot court and negotiation competitions. He was also a member of the National Mock Trial team. Upon graduation, Mr. Scheiner was inducted into the prestigious Order of the Barristers.

Mr. Scheiner earned a bachelor of arts degree in communication (with an emphasis in broadcast journalism) from Trinity University in San Antonio in 1986. As an undergraduate student, he was active in Trinity’s journalism program. He was a news anchor for the school’s FM radio station and a sportswriter for the campus newspaper.

Mr. Scheiner began his legal career as an Assistant County Attorney for the Montgomery County Attorney’s Office in Conroe, Texas. He “first-chaired” over 40 jury trials and defended cases on appeal. As a prosecutor, Mr. Scheiner compiled an outstanding trial record and became known for his energy and enthusiasm. These traits have accompanied him throughout every endeavor of his legal career.

In three years between college and law school, Mr. Scheiner worked in the field of corporate public relations. He wrote executive biographies, company newsletters and corporate pieces for newspapers and magazines. He also coordinated press events and handled media relations. This experience has been especially valuable in handling legal cases that involve media attention.

Grant Scheiner was born in Rockville Centre, New York. He grew up in St. James (near Smithtown), Long Island, before moving to San Antonio, Texas to attend college. He moved to Houston to attend law school in 1989 and has made it his home ever since.